I invite you take a moment to reflect on your own history of faith.  By doing so, not only may we discover conversion, but the challenge by Christ to profess a renewed faith.

The thirsty Israelites of our first reading complained childishly and asked if the Lord was in their midst or not.  There they were, led through the desert to the Promised Land by the Lord, and still they did not recognize Him.  A people of the covenant continued to look away from God, to turn their eyes inwardrather than see the glory of God about them.

And then we hear our gospel: where the Lord again is in our midst.  He rests near the well of His ancestors while He prepares to give a revelation of Himselfnot to a Jew or a man, as was the custombut to a pagan and a woman.  He doesn’t care about stereotypes or taboos, but rather He chooses one who will hear Himâ€¦receive Himâ€¦understand Him. 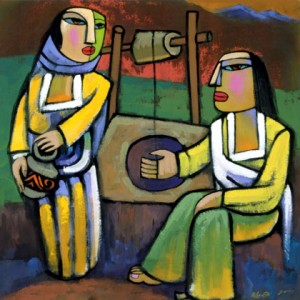 Now, He came to this deep well because He was thirsty.  And as the woman approaches, she treats Him with contemptâ€¦only later to have her eyes opened that she may call Him Sir, and Prophet, and Messiah.  Yes, the Lord is thirsty for such a profession!  His lack of bucket means that the thirst He experiences is a thirst for intimacy, relationship, faith, acceptanceâ€¦His thirst is for conversions & believersâ€¦just like the Samaritan woman who is before Him!

And the water He is willing to provide is water that grants all these things possible.

If we draw from the wellspring of Christ, we will satisfy our thirsts: we will (unlike Israel) see the Lord’s presence in our midst, we will feel His warm embrace, and we will have the promise of salvation fulfilled.

But the satisfaction that comes with faith is not a self-serving delight.  No, once the Samaritan woman encounters the Messiah, she flees to others: it is her one mission nowto proclaim this news to others (for she left the mission of fetching water!). Her faith begot faith: her proclamation of belief brought others to believe.  Hers was the impetus by which others came to the Lord and discovered His life-giving streamâ€¦and they believed.  Once they believed, they had the gift of Christ’s lasting presence among them.

At the beginning of this homily, I asked you to consider your own history of faithâ€¦your own story of coming to believe in Christ as the Messiah.  I did that so that we could now face the challenge of Lent.  Let usas people of our Catholic faithconsider our appreciation of God.

These are some of the challenges of Lent:

May these be the promises that we hope to keep in the coming weeks.

Imagine what your life would be like if you awoke tomorrow morning and found that there was no water coming into your home. What would you do? Probably you'd get a few gallons of bottled water, and feel a bit grungy and inconvenienced until the water came back on. Other than that, things would really be OK. But what if the water never came back on? And what if the stores ran out of bottled water? What if the nearest drainage ditch became the only place we could get any water at all? … END_OF_DOCUMENT_TOKEN_TO_BE_REPLACED