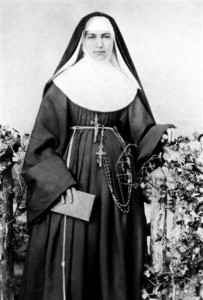 FILE – This 1883 file photo provided by the Sisters of St. Francis of the Neumann Communities shows Mother Marianne Cope, a nun who dedicated her life to caring for exiled leprosy patients on Kalaupapa in Hawaii. Mother Marianne gave her life to caring for Hawaii’s leprosy patients, outcasts that others stayed away from at the time out of fear they might contract the disfiguring disease. On Sunday, Oct. 21, 2012, almost a century after she died at the remote Kalaupapa leprosy settlement in 1918, the Vatican will formally recognize her as a saint. Bishop Larry Silva of the Honolulu diocese says she’s “an inspiration to us to do the hard work, to not always do the glory work, but to roll up our sleeves and do what needs to be done for the sake of our brothers and sisters.” Two of the seven saints to be canonized on Sunday are American women from upstate New York: the Vatican will also canonize Kateri Tekakwitha, a Mowhawk Indian who spent most of her life in upstate New York. Marianne was born in Utica, N.Y. and entered the sisterhood in Syracuse. (AP Photo/Sisters of St. Francis of the Neumann Communities, File)

Details can be found in the bulletin.