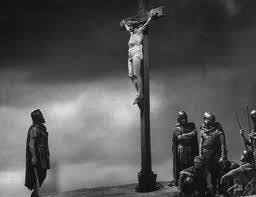 He had been in the army for what seemed a life time.  He had risen up the ranks to centurion and took this post in Jerusalem because it looked like an easy job.  Keep the peace.  No battles which he had seen too many of.  He even thought that he would find a wife here and settle down.  When he woke up that morning and walked into the praetorium to see what was on the agenda, he saw that there was 2 crucifixions to be held.  These things were not his favorite things; but necessary to keep the peace.  One of the soldiers who reported to him informed him of the events of the past evening, the arrest of a local prophet and how the crowd was bringing him to have Pilate judge him.  He sighed thinking that his easy day may be ruined.    When he saw Pilate and the leaders brought in this man he did not look like anything out of the ordinary.  In fact, he looked very small and tired and bruised.   One thing led to another and Pilate gave him and handed over this man to be crucified.  The soldiers let him away to have the usually “fun” before they led him to hill  outside the city gates.  When they were down, the centurion had the soldiers led him back to Pilate who literally washed his hands of the whole deal.

“Ecce Homo” rang in the ears of the centurion and the cries “Crucify him” haunted him for some reason.  He really didn’t care if the man was guilty or not.  He just had a job to do.  But, looking into the eyes of this man, something was different.  The centurion heard the word   “messiah” and “king”. but there was no army.  In fact, the man’s eyes just radiated love.  On the way up to Golgotha, he saw the man’s mother, a woman wiped his face, women lamenting, and others.  He had to grab this man out of the crowd to help him because he was weakening by the moment.  When they finally reached the top of the hill, the went about the work of crucifixion like a finely honed machine.  Everyone knew their part.

When the man was finally up on the cross, he had the appearance of a king who was ruling the world.  In the midst of his pain and suffering, the man looked like he was conquering. He heard the talk of the men and women who knew him.  He had healed people, talked about a Kingdom where there was peace and joy, he had talked about forgiveness and this man had even reached out to the poor.  He even heard one story where he healed the son of centurion that he knew.  None of this seemed like a crime .  Even as they went about the mechanics of crucifixion, he heard the man cry out: Father, forgive them for they know what they do”.    There was something happened here that this old soldier couldn’t quite grasp.  As he looked up at this man, his heart felt different.  It was melting as the suffering man looked at him with love.

Eventually, the centurion could see that the man was almost dead.  He had one of the soldiers offer him so wine mixed with myrrh to dull the pain and maybe hurry this along.  But the man refused.  FInally, he heard the man cry out with his eyes toward heaven;  IT IS FINISHED.  As the heaven opened up with rain, the ground shook and the thunder boomed, from the bottom of his heart, this old battle worn centurion realized who this man was and said: Clearly this was the Son of God!  As he looked up, his heart cracked wide opened, and this old soldier of Rome felt his heart filled with the presence of this man called: Jesus of Nazareth, the King of the Jews.  Now, this man was the King of this centurion’s life.

Imagine what your life would be like if you awoke tomorrow morning and found that there was no water coming into your home. What would you do? Probably you'd get a few gallons of bottled water, and feel a bit grungy and inconvenienced until the water came back on. Other than that, things would really be OK. But what if the water never came back on? And what if the stores ran out of bottled water? What if the nearest drainage ditch became the only place we could get any water at all? … END_OF_DOCUMENT_TOKEN_TO_BE_REPLACED