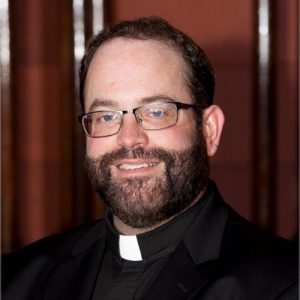 “It stops me in my tracks.  I immediately think:  I don’t want to be a priest.  I believe God for reasons I may never fully understand has decided that for me.  God is persistent.”

Deacon John Cronin was raised in Watervliet, NY, and is a parishioner of St. Brigid’s Parish, where he was educated by the sisters of St. Joseph of Carondelet. He attended La Salle Institute High School in Troy, NY and later earned a B.A. in Psychology and Government & Politics from Manhattan College in Riverdale, NY. John also earned a Masters in Educational Psychology & Statistics from SUNY-Albany, and later studied Childhood Education and Literacy. His versatile resume also includes careers in retail management and elementary education

At Pope St. John XXIII National Seminary, I sometimes get cards from people who ask:  “Why do you want to be a priest?”  It stops me in my tracks.  I immediately think:  I don’t want to be a priest.  I believe God for reasons I may never fully understand has decided that for me.  God is persistent.  He knows me better than I know myself.  And only Jesus can help me to see as he sees and to love as he loves.

At first, I was drawn to priesthood around 5 years of age much like a child who is drawn to the heroics of a policeman or a firefighter.  At St. Brigid’s in Watervliet, New York,  Fr. Joseph Grabys was one of my heroes too.  He was always so joyful with us kids in the schoolyard, and he was sincere and intense in his worship.  By the ripe old age of 10, I was overcome with wonder at the limitless love of God glorified on the Cross.  I had served at the Stations of the Cross on Good Friday, and it left an indelible mark.

But I would drift away from God’s call in fear and recalcitrance until I was in my thirties.  While I enjoyed my pursuits in elementary education, I was left wanting.  I felt like St. Peter, bumbling about and adrift in his fishing boat.  But I finally decided to listen to Jesus and let down my nets in deep waters.  I was truly amazed at the power of Jesus.  But I was also afraid of being unworthy.  The beauty lies in the fact that no one is really worthy.  Jesus only asks that we let him love us, and our lives will be transformed.

I have felt his tender touch and his compelling invitation: “Do not be afraidâ€¦.”  A life that once seemed mundane has been revived.  Once overlooked, my eyes can no longer be averted from beholding the abundance of grace that has sustained me all these years. What once looked like abandonment by a birth mother has been revealed as the grace of a woman choosing life.  And upon that grace was the love of my Mom and Dad who adopted me.  In holy simplicity and humility, they tenderly bore witness to lives of devotion to each other, to family, to faith, and to friendship.

The seminary is full of men who were given the courage to cast their nets in deep waters.  They are still sinners, but Jesus patiently reminds them they are beloved sons of His Father.   It is a common slip of the tongue to refer to the seminary as the cemetery!  And there is a certain amount of truth in that.  I was told by the dean of men in my first days at the seminary that I had come to the seminary to die. The Holy Spirit has the audacious task of helping us to let go of our selfish and petty desires:  to die to a life for self, and to live as Jesus lives:  completely for others.

The Apostles are a great source of hope that God can make lemonade out of lemons!  Despite their human frailties, they were touched by a loving God.  In their weakness, they could have turned away from God and said, “We’re not ready!”  It is like a husband and wife who may think they’re not ready to raise a child.  They’re may be right. But with God’s grace, they humbly open themselves up to being for another their child.  Anything is possible with God.  What may have been grounds for fear has been transformed into abundant joy, persistent peace, and lasting gratitude.  Please pray that all seminarians will persevere in casting their nets in deep waters, and in loving as God loves.

Details can be found in the bulletin.