Pro Patria: A Homily Fifty Days Before the Election 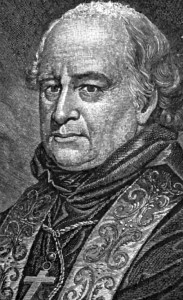 Despite the fact that it was illegal for a Catholic to vote, hold office or practice his religion in public, the Catholic gentleman Charles Carroll of Carrollton, Maryland signed the Declaration of Independence in 1776.  Thirteen years later, his cousin John was named the first Catholic Bishop in this land, a man who, by any historian’s assessment, is to be counted among the founding fathers of these United States.

Yet, despite the advocacy for the new American nation which Bishop Carroll embraced (so passionately that it once got him excommunicated as a young priest), or perhaps because of it, he followed three cardinal rules which governed his actions at the intersection of priesthood and patriotism:

That was Bishop Carroll’s vision for America as patriot and priest: an America established by the will of God through the work of our founding fathers.3 And this was his vision of the Church in America: “to grow with the growth and bloom with the development of the country,”4 serving as a leaven in the dough of the great American experiment by promoting the Gospel virtues of true religion.

And we are the inheritors of this great vision, though at times in these difficult days, we seem a long way from making that vision come true.

A long way even from realizing our Bishops’ common guidance in their latest letter to us, Forming Consciences For Faithful Citizenship, wherein they counsel Catholics approaching the voting booth to act on “moral convictions of a well-formed conscience”5 on such vital issues as human life, promoting peace, marriage and family life, religious freedom, preferential option for the poor and economic justice, health care, migration, Catholic education, promoting justice and countering violence, combatting unjust discrimination, care for our common home in the face of climate change, communications, media and culture, and global solidarity.6

All towards making a decision on which candidate to vote for.  Now it is always possible that, in any given election, all the candidates will espouse Catholic values.  In which case our decision is hard.

But then it is also possible, in any given election, that one or even all candidate might promote policies which contradict the truth we proclaim as Catholics.  And that decision is even harder.

Say, for example, that we are faced with a candidate who promotes intrinsically evil acts, like abortion or euthanasia.  This alone, the Bishops tell us, “provides sufficient reason to vote for the other candidate.”

But even more sadly, what if we are faced with an election in which “all candidates hold positions that promote intrinsically evil acts?” Then, the Bishops advise, the Catholic voter might choose to vote for no one, “or, after careful deliberation, may decide to vote for the candidate deemed less likely to advance such a morally flawed position and more likely to pursue other authentic human goods.”7

But even faced with such awful choices, as Archbishop Chaput of Philadelphia reminded us last week, we cannot give in to the “luxury of cynicism.”

“If Christians leave the public square,” the Archbishop of Philadelphia said in a talk at Notre Dame, “other people with much worse intentions won’t. The surest way to make the country suffer is not to contest them in public debate and in the voting booth.”

Only one thing can show us how to vote, he suggested: Prayer.  Prayer which, as he wrote elsewhere, “involves more than mumbling a Hail Mary before we pull the voting booth lever for someone we see as the lesser of two evils,” Prayer which “is a conversation, an engagement of the soul with Godâ€¦We need to be awake, we need to clear our heads of media noise, and we need to think quietly and carefully before we vote.  None of us can afford to live the coming weeks on autopilot.”

So you have exactly fifty days to pray.  Without cynicism, sarcasm or snide condescension.  With humility, an open heart and a love for the truth. Pray for the country which Bishop John Carroll so loved, and that by rendering unto God what is truly God’s, we might render rightly unto Caesar as well.

2 George Washington, “Circular Letter Addressed to the Governors of All the States on Disbanding the Army,” June 8, 1783.

Imagine what your life would be like if you awoke tomorrow morning and found that there was no water coming into your home. What would you do? Probably you'd get a few gallons of bottled water, and feel a bit grungy and inconvenienced until the water came back on. Other than that, things would really be OK. But what if the water never came back on? And what if the stores ran out of bottled water? What if the nearest drainage ditch became the only place we could get any water at all? … END_OF_DOCUMENT_TOKEN_TO_BE_REPLACED