(after a short 2-week hiatus during our Italian pilgrimage, I returned to celebrate the Solemnity of Corpus Christi at the parish.  Here, first, are some of my reflections given at Mass; following, is a brief history of the development of this week’s solemnity)

When I was young, my parents–as well as the parents of all of my friends–always wanted to know who we were hanging around with and what we were up to.  Positively stated, they would chide, “show me who your friends are, and I’ll show you who you are”; negatively put, “there’s guilt by association”.  In other words, what–and who–we surround ourselves with is very important in our overall development, maturity, growth and influence.  Yes, clearly the environment in which we live and move and have our being is significantly influential in forming us as persons throughout our lives. 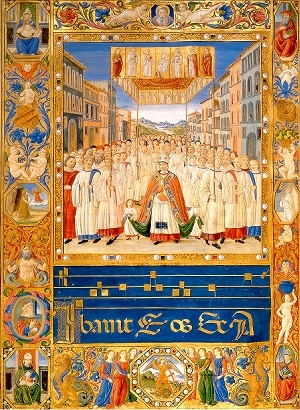 The Corpus Domini procession, in a miniature from one of the liturgical codices of Santa Maria del Fiore (15th century).

In our first reading from the Book of Exodus, Moses associates the people with not only the law of Yahweh, but now the covenant He is offering them: he sprinkles the people with blood as a sign of their new-found pact.  But, clearly, the blood of bulls sprinkled upon the people did not effect any substantive change within the people.  But now, God the Father offers a new covenant, one ratified by His Son’s own offering of His Sacred Body & Blood which, once ingested, can form a new and divine liveliness within us.  Yes, as Christ’s Body and Blood mixes and associate within our own, the spark of the Divine is again rekindled, is again enlivened and strengthened.  It is in this new covenant, that we can then rejoice on today’s Solemnity: this Body and Blood of Christ the Lord brings us closer to our divine call and, not merely as individuals, but as God’s holy people…the Body of Christ in our midst.

Let us all be ‘guilty’ by our deeper and livelier association with the Body and Blood of Christ: let our maturity and growth in holiness come about anew today and always.  Amen.

Every year, sixty days after Easter, the Church celebrates “Corpus Domini”: a religious solemnity in honor of the Eucharist (the ‘body’ – corpus – of Christ in the sacramental sign of bread): an observance that first developed in Italy the thirteenth century and in 1263 was extended by Pope Urban IV to all of Christian Europe. In Florence as elsewhere, from that period the feast has been celebrated in solemn fashion, with a majestic procession in which the Eucharistic bread is borne through the city streets in a glass container know as a ‘monstrance’, which allows people to see the consecrated bread wafer. This procession acquired ever greater importance with the passage of time. Originally the celebration was limited to the interior of the Dominican church of Santa Maria Novella. It took place after Vespers, with the participation of the Bishop, the Cathedral clergy, the City authorities, the populace and representatives of the lay confraternities.

After the Council of Vienne (1311-1312), held during the pontificate of Pope Clement V, the City Government decided to make the celebration public, increasing the solemnity of Corpus Domini by bearing in procession with the Eucharist relics of the saints.

The church of Santa Maria Novella was then the biggest in Florence, the new Cathedral of Santa Maria del Fiore being still under construction on the site of the old duomo of Santa Reparata.

Even so, the number of people taking part became so great that the Dominican church could not contain them, and the celebration was held outside, in the city streets.

In the sixteenth century, after the fall of the Florentine Republic, the Medici grand dukes took part in the procession in their princely regalia, thus conserving and increasing the magnificence of the occasion. They encouraged citizens to adorn the facades of those houses before which the procession passed with tapestries, ornamental hangings, flowers and garlands, and later forbade the movement of pedestrian and carriage traffic along the processional route.

This solemn festival occupied the whole city. The preparations began three days before the feast itself, when people hung the street awnings that would shelter participants from rain or direct sunlight, and adorned the shop facades with red and yellow bunting.

On the Feast Day, the procession unfolded with great pomp. First came the children, then the lay confraternities, then friars and monks of the different religious orders, then the clergy of San Lorenzo and of the Cathedral. Finally came the Archbishop, carrying the Eucharist in a monstrance under a baldachin (a portable canopy). The rich baldachin in cloth of gold, called “of the Republic”, used for centuries on this occasion, was in fact made and paid for by the Florentine Republic. Several days before the Feast, the City Administration entrusted it to the Cathedral Chapter. Unfortunately the tragic flood of November 4, 1966, nearly destroyed it. Since then it has not been used; the City has though restored it and given it in charge to the Opera del Duomo.

All the city’s magistracies and the heads of the guilds also took part, accompanied by the soldiery and by musicians. The processional route was strewn with flower petals and laurel leaves, which citizens sold in Piazza del Duomo for the occasion. When the procession ended, the festival continued in the city streets where stands selling sweets and drinks were set up. This solemn festival has never been neglected by the people of Florence, not even for very grave reasons such as inclement weather, wars and sieges.

Future Celebrations at our Parish

Here are some pictures of the graphics composed and filled with flowers, crushed seeds, nuts and spices decorating the routes for the sacred procession…maybe these will inspire our procession next year? 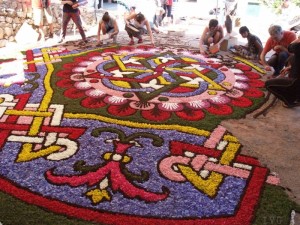 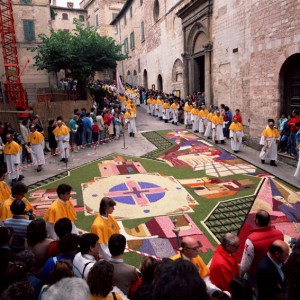 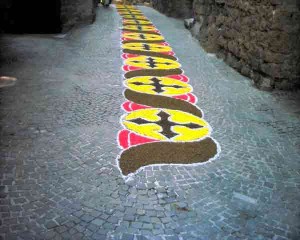