Loving in order to give Hope: One Day at a Time

Here we are a few days into a new year that cannot seem to make up its mind, one day frigid another nearly warm. With each New Year we think about beginning again, about resolutions for growing in virtue. Hopefully we seek to improve in order to love more and more consistently. As Christians we realize that the resolution to grow is with us daily, we call it conversion. Conversion is a turning to the Lord, to the Heart of Mercy, He who has come among us as one of us to heal, adopt, and raise us on high.

When I first came to visit your pastor, Fr. David, here at St. Mary’s, I was moved to see all the groups that make use of the parish facility for the sake of improving lives. In a particular way I mean those groups of mutual support and encouragement that have helped with the problems and imprisonment of addiction. There are active Alcoholics Anonymous, Narcotics Anonymous, Food Addicts Anonymous, and, more recently, Self-Mutilators Anonymous groups in this parish. This work is of great importance and these men and women who meet regularly to help one another bear their crosses are deserving of our consistent prayers.  The hospitality shown by the parish toward them has become a heritage of love in Clinton Heights.

Long ago among the first centuries of Christianity there was a Mass offered at the New Year for “the banishment of idols”, it was a world then emerging from the darkness of paganism and stepping toward the revelation of God in Jesus Christ. An idol is that which takes the place of the Living God. An ancient homily for the Christmas season by St. Peter Chrysogonus reminds us that the pagans carved images of gods in a misdirected attempt to draw divinity closer.

It is all too easy in a fallen world to fall into idol making. An idol seems to be a short-cut, an easier path. Addiction comes when we have sought to make a kind of short cut to happiness and refuge. What we come to find, however, is not freedom and refuge and home but diminishment and imprisonment.  Addictions are based on an exaggerated and disordered pursuit of pleasure, honor, wealth, or power. When any of these in their many variants take center place in life then we have ourselves chained to an idol. God wants to be our center. Addictions that have formed in pursuit of any of these four ends mark an arrest in our development and they throw a wet blanket on pursuing fully the mystery of love. Often, we fall for the false promises of these idols because of our own insecurity, lack of love and fear of not being loveable. God is here in His Holy Spirit, sacraments, word and community to be our center and to give and empower love. He is for our liberation and happiness.

From among the many admirable people who have aided the addicted in finding freedom let us consider Sr. Mary Ignatia Gavin. She is not known to many, but she was important to many in the early years of A.A. She was born in Co. Mayo, Ireland in 1889 and came to the United States with her parents where she later entered the Sisters of Charity of St. Augustine. Her early days as a sister were spent using her special talent as a musician to teach music to children. 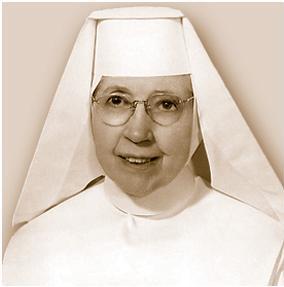 Sister M. Ignatia found herself eventually worn out and so in 1939 she turned to hospital work in the field of admissions. Here we see the often seemingly strange ways of God who calls us to places we never imagined. Sister worked in St. Thomas hospital in Akron, Ohio where she met Dr. Bob Smith, a co-founder of A.A. With prophetic bravery sister began accepting alcoholics into the hospital, seeing alcoholism as a condition in need of treatment and not merely a flaw of character as it was commonly viewed at the time. By 1952 Sister was transferred to St. Vincent Hospital in Cleveland, Ohio, to direct a ward for alcoholics. Upon arrival sister began to renovate the hospital ward with the help of alcoholic men who had the skill of carpentry. She even insisted that there be a bar for serving coffee.  Her mission was to love in order to free and restore broken hearts to the Heart of Jesus so that they would know love, have courage in the face of temptation, and begin loving again; that each live in accord with his or her  dignity in Christ.

Prior to her death at age 77 in 1966, Sr. M. Ignatia ministered to thousands who had found themselves in the prison of addiction. To her patients she recommended the practice of retreat, in order to be with the Lord, to form that relationship which is primary. She gave to each a badge or medal of the Sacred Heart of Jesus as a token and reminder and asked that if one decided to drink again he should first be kind enough to return the medal to her. In Dante’s poem, Inferno, the entrance to hell is marked with the words, “Abandon hope all ye who enter here.” Over the exit of Sr. Mary Ignatia’s ward for alcoholics was an icon of Mary Mother of Perpetual Help and the words: “Take hope all ye who leave here.” Love is Hope’s key found daily in the presence of the Lord and then given to others in attentive service to need.

Imagine what your life would be like if you awoke tomorrow morning and found that there was no water coming into your home. What would you do? Probably you'd get a few gallons of bottled water, and feel a bit grungy and inconvenienced until the water came back on. Other than that, things would really be OK. But what if the water never came back on? And what if the stores ran out of bottled water? What if the nearest drainage ditch became the only place we could get any water at all? … END_OF_DOCUMENT_TOKEN_TO_BE_REPLACED