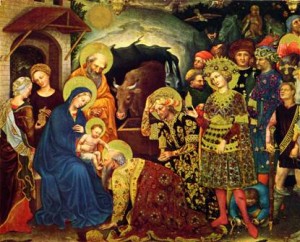 As soon as they became aware of the appearance of the star, the Magi at once, without asking any questions, made preparations to seek out their Redeemer.  So powerfully did they feel impelled, so ardent was their desire to arrive at the place revealed by the star, they did not delay a moment.  The Magi set out because of a deep desire which prompted them to leave everything and begin the journey they had been waiting for, and upon seeing the star, they followed.  They came from the darkness of unbelief to the knowledge of true faith, and thus they are fathers for us in our faith, aren’t they?

Our response to the Father’s offer of salvationthe offer made by the birth of His Son in our midstour response to His offer must be that of the Magi: for by offering gold they proclaim Christ’s kingship, by offering incense they adore His divinity, and by offering myrrh they acknowledge His mortalityâ€¦that he will die.  By offering of these great gifts, the Magi are holding nothing back from Him that is rightly His in the first place.  They are more and more free now, convinced that their King and God is in their midst, fulfilling His ancient promiseâ€¦and they turn themselves over to Him.

The Magi see Him for who He is and they respond.  In fact, creation responds as well: when the king of heaven was born, the heavens knew that He was God for they immediately sent forth a star; the sea knew Him because it would allow Him to walk upon the waters; the earth knew Him because it trembled when He died; the sun knew Him for it hid the rays of its light one afternoon.

So, my sisters and brothers, our own response to Christ’s epiphany must be that of the Magi.  For if those gentiles could see Him as their God, their Savior, their Light, their Hopeâ€¦clearly we know the rest of His story and must declare at least as much!  Our Epiphany Proclamation of the dates of various and significant feasts throughout this upcoming year, invites us to come to Him throughout these great feasts, to receive His revelation of God, and to worship and adore.

Yes, our response to The Gift of God is now necessary in very practical terms: to seek Him, to accept Him, to serve Him, and to bless Him all our days.  And once we do, once we acknowledge that the manifestation of the Son of God to the world on the Feast of the Epiphany, we will see that Christ is begging belief from us, that He might show us the power of the gifts offered to him as King, and Lord, and Redeemer, and that He might then lead us home by another wayâ€¦.

Imagine what your life would be like if you awoke tomorrow morning and found that there was no water coming into your home. What would you do? Probably you'd get a few gallons of bottled water, and feel a bit grungy and inconvenienced until the water came back on. Other than that, things would really be OK. But what if the water never came back on? And what if the stores ran out of bottled water? What if the nearest drainage ditch became the only place we could get any water at all? … END_OF_DOCUMENT_TOKEN_TO_BE_REPLACED