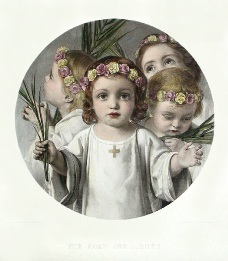 [These reflections were shared at a special Mass on the Feast of the Holy Innocents held at our parish on December 28, just a few short weeks after the tragedy at Sandy Hook Elementary School.  During this liturgy of remembrance, twenty-six white lilies were placed under the statues of the Holy Family.]

“It is fitting that we honor the little and very innocent children and their teachers whose lives were tragically taken from us just a few short weeks ago in a small school in Sandy Hook.  We honor them and pray fervently for their entry into heaven as we, today, keep the festival of those thousands of little Innocents who gave of their lives two thousand years ago in Bethlehem, in defense of the Christ child.  Beyond this, there isn’t much that can be said to soothe the hearts of all who mourn each of these deaths.

You recall the three gifts brought to the Christ child by the magi?  Gold, frankincense and myrrh, but it is this third gift that might give us some consolation.  Myrrh, a rare spice most often found in the form of ointment that was used to embalm the body of one who has died.  Even at his earthly birth, the Christ child promptly receives the precious gift that will surely be needed at the horrendous conclusion of his thirty-three short years.  But the gift is not for him: it is now destined to be offered by him to be the balm, the salve, the ointment that will wash and prepare the thousands of innocent young boys whose lives were stolen and forever silenced by Herod.  Even at his birth, Christ is offering salvation (from the latin salve) to those who suffer innocently, even unknowingly.

And so it is again in our own time: as these twenty and six were robbed of their sweet lives; as countless elderly are ushered so swiftly and cruelly to their early deaths; as thousands upon thousands of little lives are never even given the opportunity to pass through birth into this worldâ€¦and for the countless, faceless who suffer the loss of their innocence in so many horrific ways by the hands of treacherous others; for each of these the Christ child offers again and again His salve, His balm, His gift of anointing.  He knows them by name, He loves them by soul, He redeems them by His grace.

These are enough words: now may the work and ministry of the Christ child pour forth in our hearts and throughout our world.  And may the Holy Innocentsof today and of long agoshare in the joy, peace and majesty of God’s heavenly throne.”

Imagine what your life would be like if you awoke tomorrow morning and found that there was no water coming into your home. What would you do? Probably you'd get a few gallons of bottled water, and feel a bit grungy and inconvenienced until the water came back on. Other than that, things would really be OK. But what if the water never came back on? And what if the stores ran out of bottled water? What if the nearest drainage ditch became the only place we could get any water at all? … END_OF_DOCUMENT_TOKEN_TO_BE_REPLACED