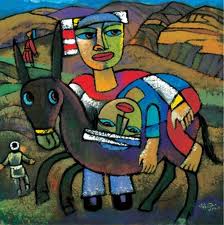 Last month we dedicated our new stained glass window in the Chapel of St. Joseph.  Since then, some have commented on the many stories that are weaved into the various holy persons that are depicted.  Some, however, may still be unconvinced of the power and beauty that stained glass has to tell a story, but let’s consider the passage we’ve just heard from Luke’s gospel concerning the Good Samaritan.

Incidentally, my love of stained glass probably took root when about eighteen years ago I visited the Cathedral of Chartres (near Paris, France) and beheld the beauty of its world-renowned windows.  In one of the windows, the story of creation and the fall of man is interwoven with the narrative of the Good Samaritan.  Instead of merely giving us a parable of moral kindness and a rebuke of prejudice, that window reflected deeper theological truths that can be missed if we hear the story of the Samaritan outside of the context of our Catholic faith and tradition.

Recall how Jerusalem is always depicted as a heavenly city, God’s city, the city of salvation.  Remember, too, that at the dawn of creation, the Garden of Eden was God’s dwelling place with the human race.  We’ll also recall how Adam and Eve were expelled from God’s company, God’s dwelling, the Garden once they sinned against God.  Well, the unfortunate man in Jesus’ parable who makes his way from Jerusalem to Jericho represents the human race which has fallen from the glory of the heavenly city to the degradation of the city of sin.  Leaving God’s dwelling (Jerusalem), the traveler in our Gospel was vulnerableâ€¦and so we see how he falls in with robbers.  His conditionbeing half-deadcan now be seen to symbolize all of humanity after the fall: robbed of its dignity and rendered incapable of saving itself.  The first two to pass him bya priest and a Levitedon’t merely choose not to help, but are, in one sense, incapable of helping the victim.  This represents the incapacity of the law itself and ritual itself to save us from sinâ€¦more is needed in order for mankind to be rescued.

Then, a hated Samaritana half-breedstops because he is moved with pity.  He pours wine and oil into the sufferer’s sores.  This character represents now Jesus: God and man, who applies the balm and comfort of the Sacramentsthe wine of the Eucharist and the oil of baptism, confirmation and the anointing of the sickto the wounds of the sin-sick soul.  Even more, the Samaritan brings the poor man to an inn and offers to pay for his treatment, thus continuing his care for the victim until the man is restored to full health.  Well, recall that the Church calls Christ “the Redeemer of the world”.  The word “redemption” means quite literally “to buy back” and “to pay for”.  And Jesus, bearing the burden for our sins on the cross, He has paid our debt, he has bought us back.

When you look at the stained glass in our chapel, just like the window of Chartres Cathedral, there’s more than meets the eye: there’s a depth of story thereâ€¦there’s a faith and holiness which are uncovered and revealed.  It just takes time and reflection: pondering the depths of our human experience and then reflecting on the glory of God revealed throughout our faith.

May the mercy of God comfort us; may the lives of the saints inspire us; and may our desire to live in and with God always inspire and invite us into His dwelling among the human race. 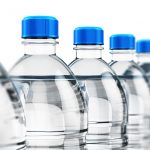 Imagine what your life would be like if you awoke tomorrow morning and found that there was no water coming into your home. What would you do? Probably you'd get a few gallons of bottled water, and feel a bit grungy and inconvenienced until the water came back on. Other than that, things would really be OK. But what if the water never came back on? And what if the stores ran out of bottled water? What if the nearest drainage ditch became the only place we could get any water at all? … END_OF_DOCUMENT_TOKEN_TO_BE_REPLACED